Skip to content
Announcements
October 26, 2013 Christmas TV Admin 3 Comments
No ratings yet, let us know what you think! 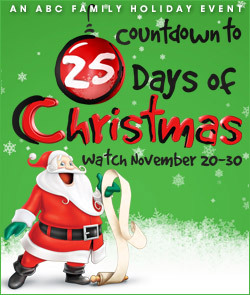 Former bounty hunter turned elementary school teacher Tory Bell (Raisa) was ready for a new life when she left the family business behind and moved to Manhattan. But when an old enemy is released from jail and vows retribution on Tory and her loved ones, she returns to New Jersey to take care of him once and for all. When Tory’s upper-class fiancé, James, follows her home for Christmas, she tries to keep her bounty hunting ways a secret, but the plan backfires when James unwittingly becomes involved in the Bells’ mission. Further complicating matters, Tory must work closely with her ex-boyfriend, Mike (Mizanin) to bring down their target and keep James out of certain danger. But as Tory becomes further entrenched in her old life, she finds herself torn between whom she once was and her plans for the future. Will Tory choose her new life with James, or will the thrill of bounty hunting and unresolved feelings for Mike prove too powerful to ignore?

On Wednesday, November 26th from 4:00pm -11:00pm ET, ABC Family will feature “Good grief! It’s the Charlie Browniest of marathons” kicking off with the ABC Family premiere of “Race For Your Life, Charlie Brown,” (4pm ET) which follows the Peanuts gang on an exhilarating adventure where they face a bunch of cheating bullies while competing in a river raft race. The marathon continues with “Snoopy Come Home” (5:30pm ET), followed by the ABC Family premiere of “Bon Voyage, Charlie Brown” (7:30pm ET). In “Bon Voyage,” Charlie and his friends head across the pond to France to participate in a two-week exchange program. The night ends with “A Boy Named Charlie Brown” (9pm ET).

We know many of you will be disappointed with the inclusion of Harry Potter, but we hope you take some comfort in knowing they will not be shown during the 25 Days of Christmas.

As soon as full “Countdown to 25 Days Of Christmas” schedule is released, we will post it here 🙂

3 thoughts on “ABC Family Kicks Off Its Annual “Countdown to 25 Days Of Christmas” on Wednesday, November 20, 2013”