Skip to content
Announcements
June 28, 2012 Christmas TV Admin 5 Comments
No ratings yet, let us know what you think!

ION Television wants to be “YOUR HOME FOR THE HOLIDAYS,” and is set to premiere five new original holiday movies starting in November 2012.

When a massive, out-of-season storm system sneaks up on Texas at Christmas, weather scientist Ethan Walker (Van Dien) is hard-pressed to convince skeptics, including his meteorologist wife, Addison (Pratt), and her coworker, Logan (Burgi), of the fast-approaching danger.

After being fired from her high-powered job, Rebecca (Sokoloff) heads back home to see her mom, Shirley (Hicks), and attend her friends’ small-town wedding on Christmas Eve. Initially convinced that the trip is a terrible mistake, especially her botched romantic conversation with former beau, Chad (Carmack), Rebecca soon learns that, indeed, you can go home again, and, again — until you get it right.

John loves Grace and her 10-year-old son, Zachary. Although he wants to propose to her at Christmas, it’s the one holiday John runs from. In this romantic comedy, chaos with exes, misunderstandings, parents and in-laws all imperil John and Grace’s relationship. But can they get it sorted out in time for the holidays?

Cast To Be Announced

Heather is a charming, free spirit and Bobby is a naval officer home from serving overseas. Thanks to three golden retrievers, Bobby’s spirited 11-year-old niece, Myra, and a fun-filled theatre production of “A Christmas Carol,” these two unlucky and unlikely people end up falling in love at Christmas.

A Star for Christmas

The only thing that is working in Cassie’s world is her small town business. Her Christmas Cupcakery is a huge success, but her love life is a mess. Cassie’s whole universe is turned upside down when she falls in love with a co-worker who is revealed to be the famous and notoriously troubled actor Alex Gray. There’s no denying that Alex and Cassie are in love, but can their relationship survive the pressure of Hollywood and the holidays?

Cast To Be Announced 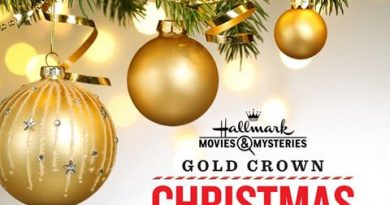