Skip to content
Announcements
June 8, 2012June 8, 2012 Christmas TV Admin 3 Comments
No ratings yet, let us know what you think!

The following Christmas movies are scheduled to be released in 2012…

A Christmas Story 2 (2012)
IMDB shows the cast for this remake of the 1983 classic has been selected. The cast includes Daniel Stern, Braeden Lemasters, Stacey Travis, and Valin Shinyei. Although we cannot confirm this, the rumored storyline is as follows:

The story will again focus on Ralphie yearning for a special Christmas present, but this time it’s a 1938 Hupmobile Skyline convertible. Sweet! Unfortunately, he takes one on a test drive and manages to ruin the convertible top, leading to a mad scramble to try to make enough money to repair the roof.

We confess, we are a little nervous about this remake. Okay, REALLY nervous. The director is Brian Levant (from Beethoven, Are We There Yet? and Jingle All the Way) so maybe there is some hope.

Eight-year-old Finn is terrified to learn his family is relocating from sunny California to Maine, and to the scariest house he has ever seen! Convinced that his new house is haunted, Finn sets up a series of elaborate traps to catch the “ghost” in action. Left home alone with his sister while their parents are stranded across town, Finn’s traps catch a new target – a group of thieves who have targeted Finn’s house. 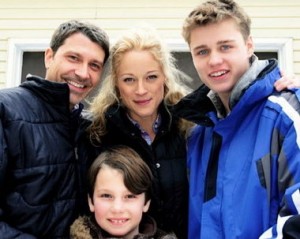 The tight knit neighbors on Arthur Avenue have proudly been lighting Christmas luminaries for 40 years, but that long-standing tradition is cancelled this year when Matt Norman, a boy in the neighborhood, is hospitalized and desperately needs a heart transplant.

This sounds like a possible tear jerker. But then, aren’t most of the Hallmark movies? We loved Teri in Meet the Parents, so this is one we are looking forward to seeing.

The Mistle-Tones (2012)
Like Home Alone 5 above, this movie is scheduled to air during the 2012 25 Days of Christmas on ABC Family.

Holly, blessed with an amazing singing voice, is all set to audition for the newly vacated spot in a legendary local Christmas group which was founded by her late mother years ago. Shocked and upset when the slot goes to the barely talented best friend of the group’s leader, Marci, Holly sets out to create her own musical group, The Mistle-Tones. After challenging their rivals to a sing-off on Christmas Eve, Holly finds herself on a journey to the real meaning of Christmas.

This sounds like something our kids will like. Though to young to know Tori Spelling from 90210, our kids always enjoy her in A Carol Christmas. And Tia Mowry is a favorite from Twitches.

ABC Family’s Countdown to the 25 Days of Christmas