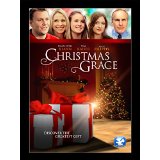 Christmas Grace tells the story of two rival toy store owners during Christmas time. Gary, who runs an honest business and has a good relationship with his customers. Everything is running smooth for Gary until he hears of a new bigger store opening up across the street from him. This owner, Jim, is a ruthless businessman who will stop at nothing to grow his business and eliminate his competition. Since his most immediate competition happens to be Gary s store, he sets his target on him. As the story unfolds it becomes very clear that God is at work in the lives of these two men, and Gods Grace and Providence work out in ways neither one of them could of imagined.